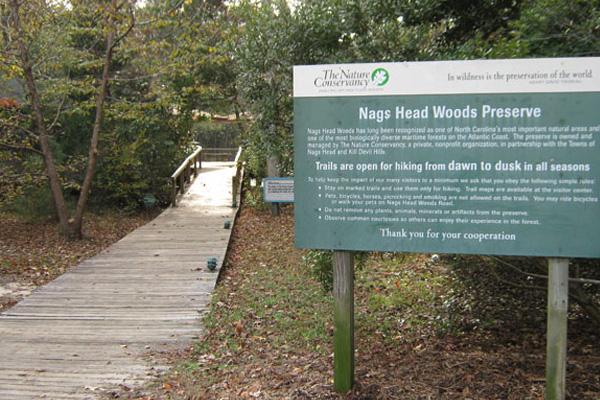 Nags Head Woods Preserve is owned and operated by The Nature Conservancy.

Hiking trails are open dawn to dusk every day for foot traffic only. No fee, but please register at the outdoor information counter.

Nags Head Woods was designated a National Natural Landmark in 1974, and protecting its unique habitats was one of the Conservancy’s first priorities in North Carolina. Between 1978 and 1986, the Conservancy acquired about 420 acres in the northern section of the forest; some of the land was generously donated by John and Rhoda Calfee and Diane St. Clair. Partnerships with local municipalities were formed early in the process, with the leasing of 350 acres from the Town of Nags Head.

In 1992, the Conservancy and the Town of Nags Head jointly acquired an additional 389 acres in the forest from Resolution Trust Corporation. In 1997, the Town of Nags Head agreed to dedicate nearly 300 acres of Nags Head Woods as a permanent conservation area under the State Nature Preserves Act. In addition, the Town of Kill Devil Hills signed a Memorandum of Understanding with The Nature Conservancy, placing another 100 acres in the forest under cooperative management. Working with the towns and other partners, The Nature Conservancy has succeeded in protecting this fragile ecosystem, overseeing both terrestrial and marine research and monitoring programs and providing trails for visitors to enjoy.

Trails are open daily dawn until dusk. Office is open M-F 9-5, with closings when staff are at meetings or in the field.

Bicycles and Horses are allowed on Old Nags Head Woods Road only. 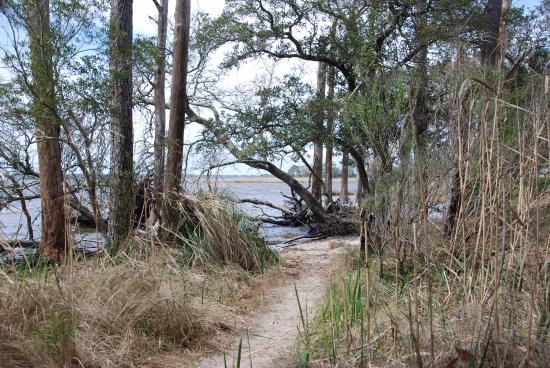